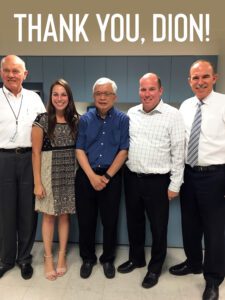 “After 41 years with Coppersmith Global Logistics, Mr. Dion Cheong, our Chief Information Officer, is retiring.  Dion is best known throughout the industry as the staunch supporter of Customs Brokers and Freight Forwarders, asking the hard questions and offering solutions to keep Coppersmith, and the rest of the brokerage industry, a resource to CBP and a supporter of the client.

Respected by both CBP and local associations for his industry knowledge and deep understanding of regulatory compliance, Dion was asked to participate in Customs’ Trade Support Network, as well as many NCBFAA technology advisory groups that helped guide the automation of the international trade industry.

Working as an independent programmer to create a proprietary system that has kept Coppersmith on the cutting edge of information technology,  Dion was on a first name basis with personnel at all levels of CBP, being asked to contribute to numerous pilot programs and new system testing as they worked for decades to modernize their computer capabilities.

Dion took pride in claiming to be the first filer to process completely paperless entries in ABI, ACE, and numerous other government agencies over the years.  All while supporting a company that handles over 100,000 transactions a year of more than 500,000 different products and requirements!

Dion has worked closely with three of the four generations of Coppersmith family ownership, shown in this picture and we all wish to congratulate Dion on a brilliant career and thank you for your years of dedicated service to our company, customers, and industry!”

After spending 41 years working in logistics, Dion is afforded a macro view of the industry that few people will ever comprehend. From his inaugural day on March 1, 1977 as the Credit and Collections Manager, to his final day coming up this week when he will retire from his position as Chief Informational Officer (CIO) the scope of his vision has been rarely matched. A pioneer in the digital revolution that is still reshaping the efficiency, transparency and integration of cargo movements, Dion Cheong has dedicated his professional life to trying to make life easier for logistics professionals.

It’s thanks to Dion that Coppersmith is so fully integrated. Operations, accounting, trucking, Customs, and clients are able to transfer information seamlessly between departments to ensure visibility and accuracy in a way few firms can. Pioneering the ACE and ABI programs, with a focus on designing software for operations and accounting, his goal has always been cohesion among the different departments. The challenge of achieving that goal has inspired him throughout his career.

“The challenges kept me going. There’s always something new to figure out; some new problem that lets us get involved and find a solution. We always hope that solution will lead to another and another, continuously bettering our service.” Dion explains when asked what has been the best part of his position. “Coppersmith is like a family and I don’t mean that lightly. Being in the information technology side of the industry we’re working everyday with everyone, everywhere. We don’t have teams, or sides. It’s everyone together working to make the whole of Coppersmith better. When I started at Coppersmith we had five people in the San Francisco office, around thirty in Los Angeles and two people in the Houston office, so I’ve had the ability to be part of the growth and get to know each and every piece of this puzzle.”

After spending more than four decades traveling with his position at Coppersmith, Dion doesn’t plan to completely settle anytime soon. “I love traveling internationally and learning about different customs and meeting different people. I hope I get to keep doing that with my wife and daughter.” Trips to China, Vietnam, Hong Kong and Cambodia for work may turn into family trips to the Philippines but the global perspective doesn’t diminish once he retires. Nor will Dion’s complete dedication to improvement as he plans to use his new spare time to learn to play piano.

“It’s always been a dream to have time to dedicate to really learning to play piano and mastering it. I’m excited to have this time to devote to such a beautiful art form.”

“Dion started in the accounting department in March 1977.  Two months later Lew Coppersmith asked Dion if he would like to learn about computers since they were new and seemed to be the direction of industry.  Dion was fascinated with the process and 41 years later he is recognized by the industry and government agencies as a go to guy.

Dion not only understood the automation side but was well versed with the brokerage and forwarding processes.  With these skills he was able to produce a system that was efficient, compliant, and accurate.  Dion was known to help various government agencies with their programs since he knew what was needed and what was possible.

The system Dion developed is very proficient in all three parts of logistics: Brokerage, Forwarding, Accounting, and that is a rare thing in our industry.”